Billy was born into the large Foster family on September 18th of 1937. As several of the Fosters were involved in the automotive trade and in local auto racing at Langford Speedway, it was natural that Billy would also be drawn to these family interests.

With the closure of the Langford track in 1950, racing moved to “Shearing Speedway” north of Duncan in 1952 where Billy began his driving career at the age of 15 in 1953, moving to Western the following year and being joined on the track by his cousin Jim. Billy won his very first main event on July 24th and finished the 1954 season in 10th place in the points standings.

He drove on and off for his cousin and other car owners until 1960 when he began an association with Jim Haslam whose #98 ’34 Ford coupe Stockcar he drove to a 5th place points finish that year, winning the “July Cup”, the “Roy White Memorial” and the “Season Championship” race plus being voted “Most Popular Driver” by Western’s fans. Jim built a 265 cubic inch Chev V8-powered ’34 Chevy coupe for the 1961 season which Billy guided to a 3rd place in points, also capturing a 3rd at Edmonton’s “Gold Cup” race against several more sophisticated “Modified Sportsman” class cars.

In 1962 Jim put Billy in a Ford overhead valve V8-powered car for Western’s new Modified Sportsman class which they also ran in the annual “Mount Douglas Hill Climb” with Billy posting the fastest time in his class. For that year’s “Daffodil Cup”, he drove another Sportsman with John Feuz as his mechanic and won the 150 lap race and also finished Western’s Sportsman season in 1st place in the standings.

For 1963, Billy drove an offset roadster powered by a 327 cubic inch Chevy V8 on the newly-formed CAMRA (Canadian American Modified Racing Association) circuit and was it’s 1st season champion, his many wins including that year’s “Daffodil Cup”. In 1964 Billy won the inaugural “Strawberry Cup” and went on to finish 2nd in CAMRA behind Jim Malloy. He also received his USAC (United States Auto Club) competition licence which enabled him to compete in their “Milwaukee 200” open wheel race on August 19th. Billy was also given a life membership in the “Vancouver Island Track Racing Association” (VITRA), joining Dave Cooper who was the only other recipient of the honour at that time.

Billy became the first Canadian to ever qualify for the “Indianapolis 500” in 1965 and was recognized as “Citizen of the Month” by the Victoria Chamber of Commerce on the 18th of May. His 6th place starting position in a Rolla Volstead-owned Offenhauser-powered car put him in with the likes of A.J. Foyt, Jim Clark, Dan Gurney, Parnelli Jones and a fellow “Indy 500” rookie that year, Mario Andretti. He went on to place 19th in the race, forced out by a broken water manifold on the 85th lap. In addition to the “500”, Billy also drove in other USAC open wheel races that year and also competed in their “Stockcar” division with his performance getting him voted “Rookie of the Year”at season’s end.

The 1966 season saw Billy qualifying for the 12th starting place in that year’s “Indy 500” and being involved in a disastrous 1st lap crash that took out himself and 10 other cars. Although being initially accused of being the cause of the crash, he was later fully exonerated. He competed in the remainder of the USAC Champ Car season, which included an event at the “Mt. Fuji” road course in Japan, and finished 10th in season-end points standings. In the USAC Stockcar division and again driving a Dodge for car owner Rudy Hoerr, Billy had a stellar year, finishing in the top 5 in practically every race he entered and ending the season 3rd in points.

For 1967, Billy would again be driving for Rudy in the USAC Stockcar division, this time in a brand new 1967 Dodge Charger. The season began with NASCAR’s “Motor Trend 500” at the road course in Riverside, California. But Billy would sadly never see the race’s green flag start. During a practice session the day before, a front brake drum failed, sending him into the course’s 9th turn wall and killing him instantly. His funeral was attended by hundreds which included family, friends and fellow competitors including Mario Andretti with whom Billy had formed a strong friendship.

Also in the aftermath of his passing, the #27 which Billy ran during his career was retired and a special “27” flag was unfurled at Western at the start of each and every race meet for many years after. Two special 100 lap “Billy Foster” races, one for Modifieds and one for Stockcars, were also run yearly for some time.

In 1984, Billy was among the group of 7 initial inductees into the “Victoria Auto Racing Hall of Fame”.

In June of 2016, Billy was honoured at the opening of the “Vancouver Island Motorsport Circuit” road course located in Vancouver Island’s Cowichan Valley which was attended by several friends and members of Billy’s family which included his cousin and internationally-known musician and composer David Foster.

1955 at Western – #10 Stockcar with (left to right) Richard Game, unknown and Billy Foster 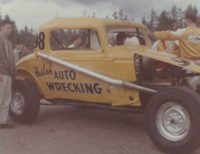 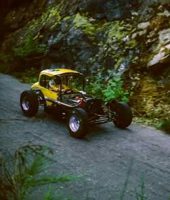 1962 at Western – John Feuz (left) with Billy following their win of that year’s “Daffodil Cup”. 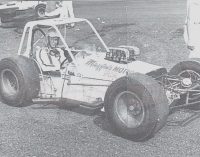 1963 at Portland Speedway – Billy in his offset roadster CAMRA car. 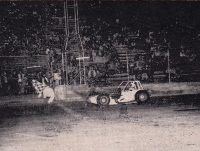 1964 at Western – Billy taking the checkered flag at the inaugural “Strawberry Cup”. 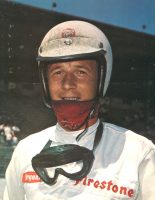 1965 at the Indianapolis Motor Speedway – promotional shot of Billy.