When he arrived in Nanaimo in 1951 with his family from their birthplace of Copenhagen, Denmark, 19 year old Hank Neilson had already completed his apprenticeship as a mechanic and machinist. Soon after arriving, his father, brother, and he began the operation of “Mountain View Service”, an auto repair garage which would be a very successful business for many years.

Encouraged by Ray Pottinger in 1952, Hank put his skills to work in the building a race car. In 1953 he began racing at “Shearing Speedway” north of Duncan in a 1934 Ford Stockcar. During this first year of driving he won a “ B” Main event, following which he was invited to enter the “A” Main which he then proceeded to win as well. Hank’s subsequent successes at Shearing helped to put Nanaimo on the Island auto racing “map”.

In 1954 when Western Speedway’s new 3/8 mile dirt track opened in Langford, Hank raced at both tracks although within a year the Shearing track closed leaving Western as the only place to race. It was here that Hank discovered a weakness in the front wheel spindles on his ’34 Ford which caused him to lose a couple of wheels, one of the results of which was a bad rollover that put him in hospital for two weeks with a severely broken arm. True to his racing spirit, Hank recovered and worked out the problem, returning to competition with a stronger truck front axle assembly. This was not to be his only rollover however, and over his career he collected several “rollover crests”.

Hank’s driving ability won him many races against many notable Victoria drivers including Digger O’Dell, Dave Cooper and Dick Varley. Over the years, Hank built his own engines and cars using his growing experience to constantly improve their performance and reliability. The heating problems with the Ford flathead V8 motors that powered his and a great many of his fellow competitor’s cars was solved when Hank and others removed alternate fins from the engine’s dual water pump’s impellers which resulted in improved cooling and reliability.

He was narrowly edged out of first place in 1955 by Dick Varley in the 100 lap Championship Race at Western and on June 1st of 1957, Hank’s #92 Stockcar was the first to take starter Phil Hendry’s green flag for time trials on the freshly-paved former dirt track. The mid 1950’s also saw Hank, Wally Illott and several other Nanaimo racing enthusiasts devoting time and effort to promoting a racetrack for the Hub City, the successful result of which was“Grandview Bowl”which opened for the 1958 season. This same group was also instrumental in forming the “Mid Island Auto Racing Association”(MIARA) where Hank served on the club’s executive. He finished the ’58 racing season in 8th spot in the Island points race and bettered this with a 4th in 1959 which was a banner year with Nanaimo drivers grabbing 6 out of the top 10 finishing positions which included Bob Clarke’s winning of the “Island Season Championship” and it’s coveted #1, the first time ever for a Hub City driver.

Hank recorded many wins and good finishes in both Nanaimo and Victoria until 1960 when a mid-July rollover damaged his car beyond repair and he chose to end his season, selling the car’s engine to the Fanny Bay “Drifters” car club who installed it in their #17 car which was driven by Bob Mawle. Despite the premature season end, he still ended up 10th in points for the year. Choosing not to build a new car for the next season, Hank continued to get behind the wheel when needed for several car owners including Nibbs Anderson, Ray Pottinger, and Red Burke. He could jump into a car when the regular driver was absent and drive it competitively, keeping it in the points standings and also managing to win a few more races along the way. 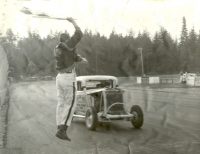 1960 at Western – Another view of the rollover that ended Hank’s season (Barrie Goodwin photo). 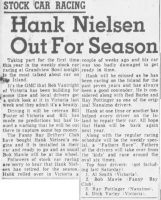