Ladysmith’s Bill Drummond began his racing career at the age of 28 in 1966.  With only six races remaining in that season, he towed his new 1949 Ford “Jalopy” over the Malahat to compete at Victoria’s “Western Speedway”, finishing the year 42nd out of a field of 52 Island drivers.

In 1967, in addition to racing at Western, Bill also competed at Nanaimo’s “Grandview Bowl” where for the first time in Mid Island Auto Racing Association (MIARA) history, a tie occurred with Bill jointly accepting the O’Keefe’s “Old Vienna Brewing Company” trophy for most “A” trophy dash wins and the “Globe Hotel” award for “Most Main Events”.  He also won the “Simpson-Sears” 50 lap “Stock Car Championship” race, the MIARA trophy for “Best Appearing Stockcar” and finished 2nd in MIARA points standings.

For 1968, Bill built a 1956 Chev sedan, racing mainly in Nanaimo with the occasional appearance at Western Speedway.  He won several races and by the end of the season the car’s body was ready for the junk pile, but it kept him in the #2 spot in points for the 2nd year in a row.

Another ’56 Chevy in ’69 finally carried Bill to the #1 spot which included winning the most trophy dashes and main events, setting a new Grandview Bowl track record of 19.23 and being voted Nanaimo’s “Most Popular Driver”. Another highlight of that year was his breaking an axle during an early race which resulted in an end-over-end rollover.  Despite this setback, his crew made the necessary repairs in time and Bill went on to win that meet’s 30 lap main event.

The 1970 season saw Bill in another 261 cubic inch Pontiac 6 cylinder-powered 1956 Chev and running the big #1. Following the first two race meets, he pulled the head off the motor and found a broken wrist pin.  It was 3:00 p.m. on a Sunday afternoon and the only remedy was a new engine.  Simple enough, but not when the next race was at 1:30 the next day.  By the time Bill and his crew found a new block and had new parts delivered it was 11:30 in the evening.  They worked all night building up the new motor and had it installed by early morning, making it to the track half an hour before time trials following which Bill went on to win the trophy dash and main event. By the end of the season he emerged at the top of the points standings once again.

In 1971 Bill broke the track record 3 times throughout the year, ending up with an 18:47.  He won most of the dashes, heats, and mains for the 3rd year in a row and was voted  “Most Popular Driver” on the Vancouver Island circuit. He won the Championship race for the 4th time which was his 3rd successive year but fell short of the top spot, finishing 2nd.

In 1972 he won the # 1 position back and in 1973 took the year off as a driver to fill the official’s position of “Head Tech Man”.  Driving a “Super Stock” for Bill Vater in 1974, he broke the track record, won several trophies and finished 3rd in points.  In 1975 he continued to drive for Bill and held on to his 3rd place in the standings but at the end of the season retired from racing.

In 1977, Bob Powell coaxed Bill out of retirement and got him to drive his “Hobby Stock”, but he only drove in a few races.  But this experience did revive his interest and in ’78 and ’79, Bill was back in his own car driving in the Super Stock “Island Series” at both Victoria and Nanaimo and finished in 3rd place in points both years. At the end of the 1979 season, he “hung up his helmet” for the final time. 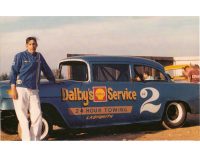 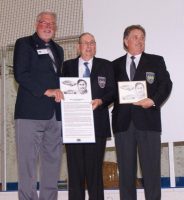 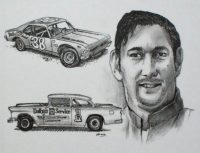